Investors pulled billions from precious metals and stocks at the same time as a substantial price increase and prevalent surges in the volume of Bitcoin.

Evidently, investors consider bitcoin to be more profitable than gold.

The stock market faced it’s the largest withdrawal numbers since 2004, according to a report by CNBC. Astonishing data showed that more than $30 billion was taken from the markets over the last 2 months.  A large percentage of the withdrawn funds were from abandoned precious metals.

BofA Merrill Lynch data from the last 10 weeks shows the private allocation of investments in precious metals in a steep decline.  The portfolios with these precious metals have been shrinking from those who were holding 10 percent in 2014 down to 2 percent at the time of writing. 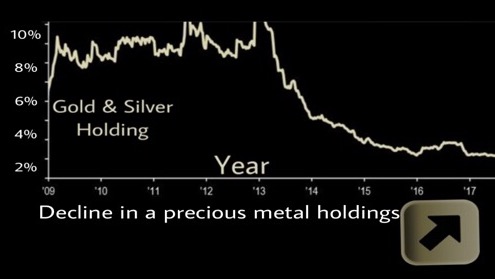 The total volume and price chart for bitcoin over a year’s time shows a steep upward sweep.  In May, June, July and August an undeniable surge occurred.  As investors began to flee from gold and silver, the cryptocurrency volume steadily grew in a coinciding manner, totally aligned with the highest withdrawal activity on record for the US stock market in over a decade. The timeline of the mass withdrawal fits like a key where there was a Bitcoin spike.

The fact that these withdrawals took place at the same time as a surge in Bitcoin occurred, says a lot about the advantages offered by the cryptocurrency as a store of value. Not only is BTC cheaper to store and transfer, it can also be kept hidden from governments who may resort to confiscating people’s gold.

Bitcoin is winning, and the numbers say so.

There have been years of speculation that this would happen, and many still don’t believe that Bitcoin is anything but “a scam”. When over 30 billion dollars worth of gold investments gets swapped for Bitcoin, they are onto something.