Bitshares for almost a week has been making a strong statement and Core Media noticed that it was on fire. Within a week the platform has risen more than 100 percent.
On the early mornings of Saturday, it rose as much as 119 percent to kick Waves out of the 10th position on CoinMarketCap. When everyone thought it was going to slow down a bit, it gave an indication it is not yet done by pushing Monero and Stratis out of its way to be the 8th most expensive digital currency in the world.
Way To Top 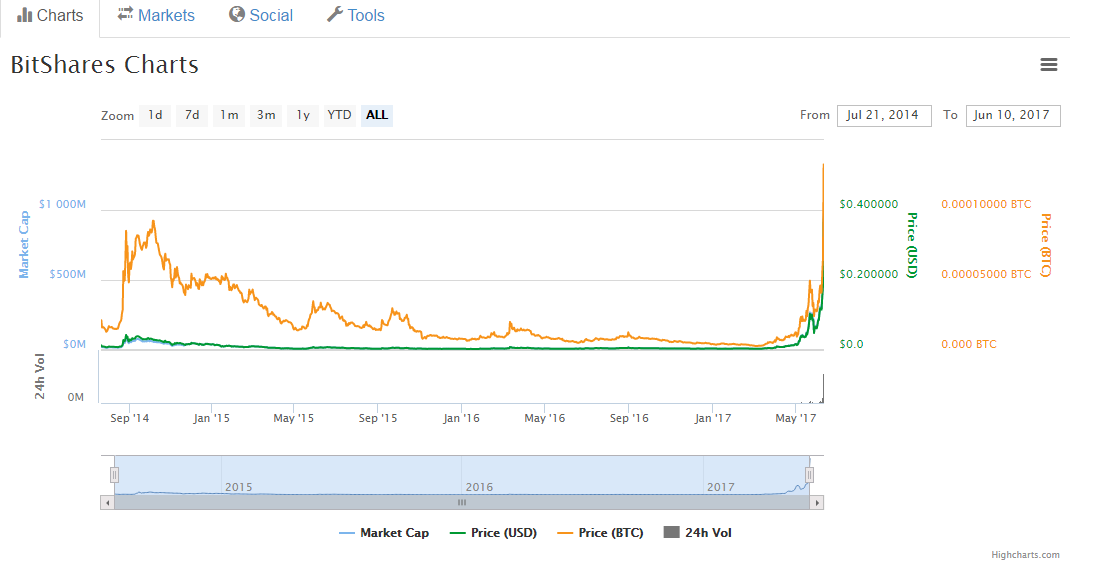 Core Media is not surprised at all since we have been monitoring Bitshares for a week now. For instance, on Thursday and Friday, it was the most appreciated Cryptocurrency on the top 20.
It soared up as much as 34.03% and 17.70% on the two consecutive days. It is now looking menacingly at the 7th spot where Dash is sitting uneasily.
At press time its market price was $0.380249 and a valuation of almost $1 billion. Interestingly, it has the 3rd highest trading volume of nearly $500, million in 24 hours, only after Bitcoin and Ethereum.
Traders Reaction
Core Media reached out to some traders on the various trading platforms to sort their views on the development.
“I’ve been monitoring and buying Bitshares for more than one month and I’m very glad my articulation has worked to perfection,” Crypto Crazy told Core Media. Moreso, he believes Bitshares is not yet done.
On the part of Kiki, it is all regrets. “OMG, I wished I bought more, I actually bought only $100 last week to test the market after a friend told me about it,” he said.
Pumpy, on the other hand, is ecstatic beyond compare. He says:
“Let the party begin! I think I’m going to leave my day job any moment from now. I took the risk and bought a chunk a while ago. I’m so excited I don’t know what to say. Stratis has changed the direction of my life!”
The move has denied Waves and Bytecoin top 10 glories. Stratis now occupying number nine whilst Monero has to be content with the bottom spot at the elite arena.
Tweet
Share
Pin
0 Shares
2017-06-10
Previous Post: What Does Mark Cuban Know About Cryptocurrency?
Next Post: Civic | Balancing the Scale between Security and Accessibility