A recent post by CoinTelegraph has spooked Bittrex users with the claim that thousands of accounts have been disabled without warning and without any communication from the Bittrex team. Twitter was ablaze with users claiming some countries, more than others, are affected. (eg. India, Syria, Iran, Russia and Egypt). It was also claimed that Iran was specifically hit.
However, within the deeps of slack, the Bittrex team did respond on October 14th.

“Support is working on disabled accounts. Most were disabled for a reason, a handful got inadvertently disabled. The support team is working on it. There is nothing I can personally do about it. Account status isn’t something I can help with.” – Bittrex Bill.

The most important part to note in that quote is the admission of some accounts wrongfully disabled. Furthermore, the most recent posts today by Bittrex Ryan and Bittrex Richie, suggests they are still manually verifying accounts.

“Most failures right now are due to ID having a different name then basic verification…Currently, requires a manual verification that the names match, we are looking to improve automation around it asap” – Bittrex Ryan

According to Bittrex Bill, only 0.1% of Bittrex accounts have been affected. Also, a quick look at Twitter shows that people from all different countries were affected. Yet this minority of disabled accounts are making their voices heard loud and clear.

The affected accounts, as the quotes suggest, are likely due to a verification error where the ID’s provided do not match the information inputted into the account creation process. While Bittrex does not comment on why accounts have been disabled, according to Bill, “most were disabled for a reason”, hinting that the older accounts were disabled manually for possibly suspicious reasons. According to Bittrex guidelines, Bittrex can disable your account for one of the following reasons.

2. We suspected your account was hacked and disabled it for you

3. You attempted to verify your account with an identification document that has already been used

Due to Bittrex’s status as a leading cryptocurrency trading platform, conspiracies and “FUD” are almost everyday occurrences. According to a recent blog post by TheCryptoSyndicate, Bittrex coins show similar trends, in that all the coins were selling off in a similar fashion at the same time. 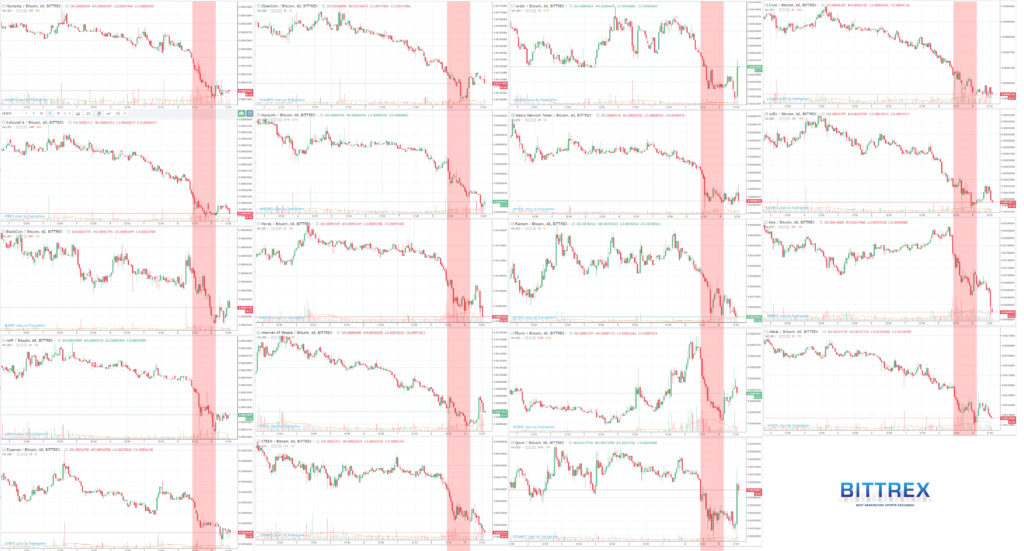 However, there is nothing particularly insightful about the largest and most liquid alternative cryptocurrency exchange, that hosts the biggest “whales” and day traders in the crypto-world, to have all these people think alike at the same time. In fact, this is exactly what traders do when they need to liquidate into Bitcoin. While the current author is not stating that there is or there isn’t manipulation or a surge of disabled accounts, the evidence for such an accusations seems to be flimsy at best.

It is, however, not surprising that some people are wary of the Bittrex’s recent activity, for recent news in the centralized exchange’s markets has been particularly grim. Bitfinex itself recently confirmed it is blocking all United States user accounts on November 9th. The blame lies in SEC regulations. Despite being based in Hong Kong, Bitfinex’s user base included a whopping 40% of users from the United States. This, on top of the ongoing purges in China, Russia, and South Korea, has everyone on edge and it is not surprising Bittrex is now under a heavy spotlight with every move they make.