“It became clear that it is not straightforward to address Bitcoin with existing financial regulation. Regulators and financial agencies agree to not prohibit the use of Bitcoin. Instead, we want to gain a better understanding of Bitcoin, and build a regulatory framework we have gathered the necessary knowledge.”

To deal with this issue and to spread awareness in regards to cryptocurrency regulations, the Waves Platform, Digital October Center and Digital Finance Agency organized the “Cryptocurrency Regulation in Russia” conference. The event took place yesterday in Moscow and counted with the participation of public figures in and outside of the Blockchain sphere like Deloitte(Ksenia Osipova), State Duma(Elena Sidorenko), Microsoft Russia(Kostya Goldstein), Sberbank(Dmitry Bulychkov), QIWI(Constantine Koltsov), Emercoin(Stan Polozov), NPC(Alma Obayeva). 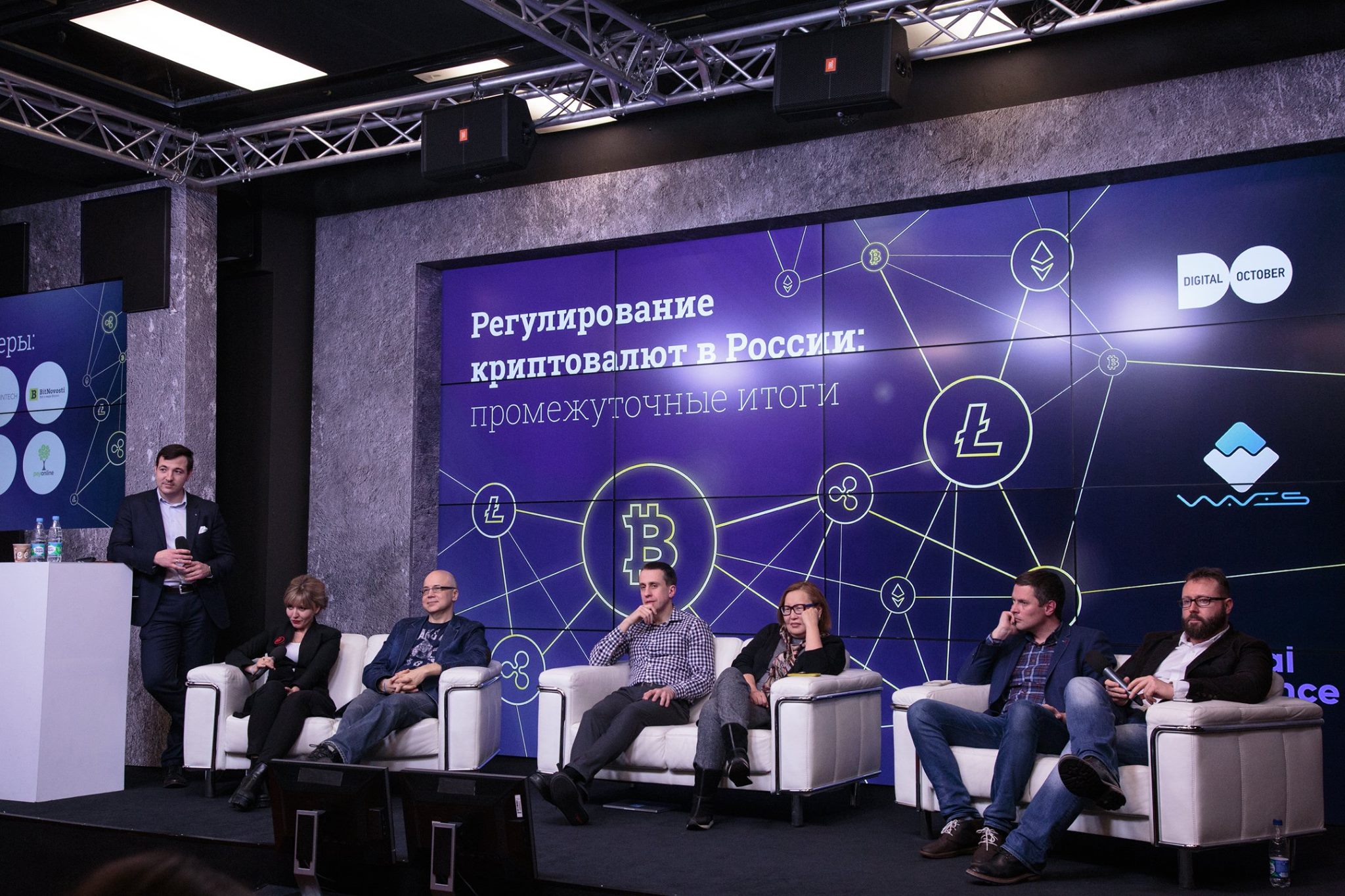 Ksenia Osipova, Senior Consultant at the Law Group CIS Deloitte, recalled the history of relations between Russian regulators and cryptocurrencies and considered the message that was contained in last year’s letter to the Federal Tax Service in detail. According to her, this was the first attempt to influence regulators on the market.

According to her, Now the Russian cryptocurrency market may develop the three scenarios, from the most negative, which implies a ban on transactions with cryptocurrency to the most positive – legislative secured permission to make payments and transfers via cryptocurrencies. She stated (translation): “It is from 2017 forward that there will finally be real discussion and analysis, and we will continue to work with cryptocurrency in the country”.

Elena Sidorenko, Doctor of Law, Professor of Criminal Law, Criminal Procedure and Criminalistics from Moscow State Institute of International Relations under the Ministry of Foreign Affairs of the Russian Federation also noted the need to fill the legal vacuum around virtual currencies. According to her, there is a recent trend towards changing attitudes of officials in regards to cryptocurrency. Earlier in government agencies mainly discussed issues related to the ban cryptocurrency, although this has now changed.

She commented the position of the Russian authorities on the matter: “All hiding and waiting, looking at the experience” of other countries. The main barriers to the creation of legislation, according to her, are the following questions: What is Bitcoin – means of payment (not subject to VAT) or digital good (subject to VAT).

Managing Director at Waves, Sasha Ivanov states that regulation is necessary for cryptocurrencies as a complete ban of this technology is unlikely to succeed due to their decentralized nature and especially since they carry the potential for a large-scale improvement of business processes. Sasha said: “Technology is often ahead of legislation”.

According to Sasha Ivanov, the general consensus of the speakers was that Russian regulators are close to some form of legal framework for cryptocurrency in the country. Most probable scenario is a separate law concerning the legal status of crypto, analogous NY bitlicense. He also noted the importance of events like this one, stating:

“Events like the Cryptocurrency Regulation in Russia are important for the growth of Blockchain technology and extremely useful for the community as they help spread awareness on the regulations imposed on cryptocurrencies, allowing users and companies to operate within the legal boundaries of the country.”

The event featured, not only talks, but also an interactive round table where questions from attendees were be answered in a Q&A type format. The discussion was moderated by Artem Tolkachev, Director, Head of Legal for Tech Group in by Deloitte CIS. The topic featured at the round table was: “The intermediate results of the control and application prospects for cryptocurrency blockchain technology in 2017”.