Darcrus, a project that seeks to bring the best of blockchain technology to the business world, continues to make progresses, releasing scheduled updates and steaming ahead on sales, having acquired one paying customer already, even before the project’s main product, the dAppsheet, has been officially released.

Darcrus progress has not gone unnoticed and already the asset is available for purchase through the Changelly “one-click” exchange, allowing users to acquire DAR with their credit card. Mercury has also been added to the Cryptopia exchange.

Last month, we talked about the Darcrus project and some of the most recent updates. We have also talked about how Mercury and Jupiter work, allowing for a whole new class of private blockchains that can be publically verifiable thanks to the Waves Platform’s ability to have transaction fees paid with custom assets like Mercury itself.

Just in case you’re not quite sure what the Mercury token does or in case you forgot, it basically allows Jupiter, a private blockchain built specifically for information storage, to communicate with the Waves blockchain indirectly. This is done through transactions on the Waves Platform in which Jupiter’s block hashes are added as a message. Since Waves allows transactions to be paid with assets, the Mercury token is used to pay the fees of the transaction, allowing the use of the Waves blockchain to be much more cost efficient.

And what does this achieve? Since a block hash is a unique cryptographic hash that is derived from the information contained on the block (in this case from the Jupiter Blockchain), it is possible to compare the hash contained on the Waves transaction with the hash of the Jupiter block. If they are different in any way, it means that the information on the Jupiter blockchain has been tampered with, and if they are exactly the same it means that the information has remained the same. Basically, this system allows private blockchains to be trustless and verifiable, while maintaining the advantages that a private blockchain brings in comparison to a public one.

While this system may seem hard to develop and implement, it has already been done. Darcrus’ Mid Month Update blog post reads:

“Mercury is now publishing Jupiter’s block hashes on Waves’ public blockchain. Cross-chain communications and collaborations will be an important capability for Jupiter’s and cryptocurrency in the future.”

Last month, we also talked about Darcrus’ buy-back program and how we would see it in action soon. Well, since then, Entrant Security Inc. has been integrated and the payment has been made, which resulted in Darcrus’ first public token burn on May 7 that saw 4893.01285935 removed permanently from circulation.

These 4893 DAR tokens were purchased with 10% from Darcrus net profits, in this case the payment from Entrant Security Inc.

So, Jupiter and Mercury are complete and the first buy-back and burn has been accomplished. But that’s not all! The first version of the dAppsheet framework is complete and the team is now working on linking a Graphic User Interface (GUI) to this same framework. The May Updates post on the Darcrus blog reads:

“The dAppsheet framework v1 is complete and will be pushed to GitHub later this weekend. This is a major milestone achievement. I am working on linking a GUI to the framework, similar to the prototype, and will be available on GitHub as well.”

As so, Darcrus continues to make progress in its roadmap as it steams along towards the official release of dAppsheet v1. 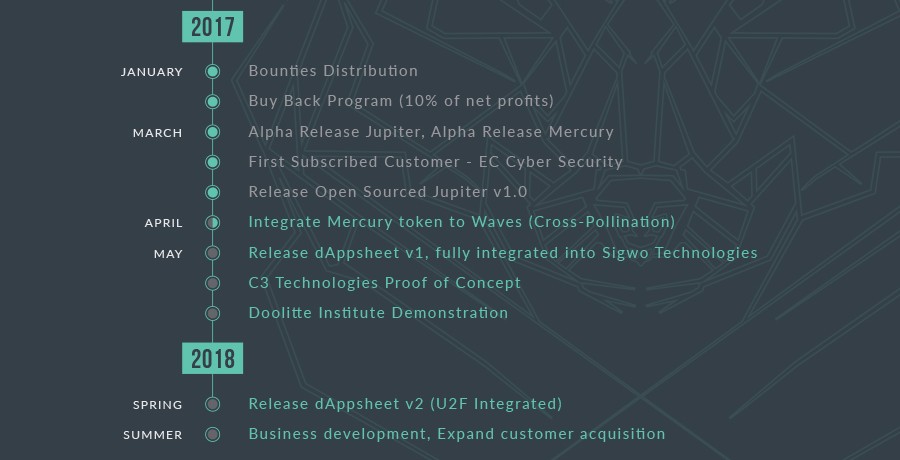