Decent is a decentralized content distribution platform that leverages the nature of blockchain technology to bring forth a model that is both fair and transparent, benefiting the consumers and content creators. The former get access to cheap content with no middlemen interference, censorship or inefficient subscription models and the latter gets access to cheap placement, hosting and fair placement/ranking attributed by the community with no censorship whatsoever.

The Decent network relies on DCT, its underlying token, in order to be used. All purchases and fees within the network are done with the DCT token, which was distributed during a crowdfunding campaign in 2016. During said campaign, Decent raised 5,881 BTC and was able to secure partnerships with companies like Naughty America and received a grant from Google.

Yesterday, DECENT announced the launch date for their blockchain-based digital content platform, June 20th, 2017. The news comes following the release and test stage of two prior mainnets dubbed “Ceaser” and “Alberti”, these counted with the participation of the community which helped “test, refine and polish the the DECENT Network into a revolutionary technology.”

As so, starting from June 30th, content consumers and producers alike can enjoy the DECENT platform with no middlemen interference, fees or censorship, allowing for a better overall user experience for everyone involved. And, according to DECENT, it’s only the beginning.

This ecosystem can be used by companies and individuals that wish to monetize digital content or goods while also providing an income for those providing hosting services. Decent relies on a decentralized network of publishers that host shredded and encrypted files and present them once a user makes a purchase.

The Decent network will also serve as a base on which developers can build and monetize their own applications that act as layers to interact with the network itself. These apps will facilitate content publishing, consumption and monetization. Examples include blog platforms, music publishing apps, photo sharing and marketplaces.

In an effort to showcase the potential of this feature, the Decent team is currently finishing the Decent Go marketplace, a decentralized market for digital items and content built on the Decent blockchain. The app allows anyone to buy and sell digital items, leave a rating and a review on the content. A built-in DCT wallet will be available within the app, displaying the user balancing and allowing him to transfer it or to receive coins.

A preview of the graphic user interface can be seen below: 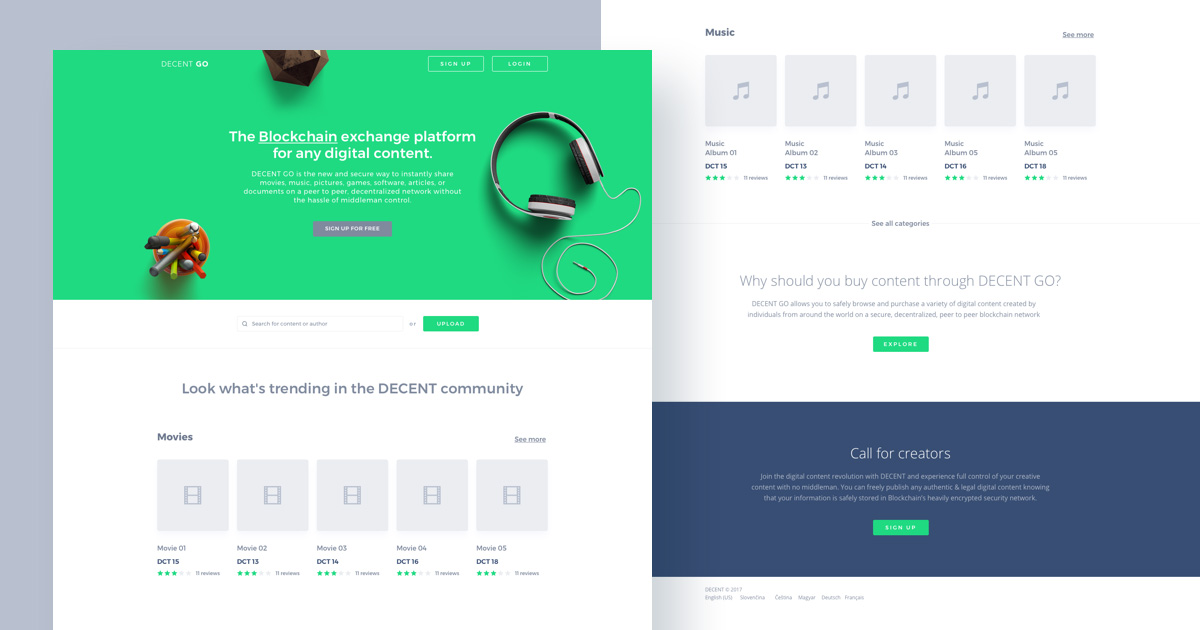 Further apps like the Decent Go marketplace are expected to be built by independent developers and members of the community, who will be able to monetize them. Although this is the first use case for the Decent network, it already fixes multiple problems both for sellers and for buyers, who are often affected by high middlemen fees and other problems.

To learn more about Decent, visit the official website and keep up with the blog. Make sure to try out the DECENT network on its official release day, June 30th.