By: Kanoptx
In: NEWS
One of the driving factors behind the fast-paced growth of cryptocurrencies is their low entry barrier. Users can invest in cryptocurrencies for as low as $10 and they can do so without any previous experience or special knowledge by simply accessing a cryptocurrency exchange via a computer or smartphone.
These exchanges, despite being convenient in opening up the gates to the crypto sphere, also represent one of the most pressing issues in the blockchain world, security (or lack of it).
As we’ve seen with cases like Bitfinex hack and the infamous Mt. Gox, the centralized model behind exchanges has made them an easy and attractive target for cyber criminals who have proved to be more than able and willing to bypass security measures and run off with millions of dollars in crypto assets. Not only are these exchanges targets for outside attackers, they are also prone to inside theft.
Ideally, cryptocurrency exchanges should be fully decentralized, and although several attempts are being made, none has been able to match the convenience and speed of a centralized exchange while maintaining a fully decentralized or trustless infrastructure. SuperNet, however, is in the course of changing this completely.
What is the EasyDEX
The EasyDEX is a fully decentralized exchange that is both convenient and reliable. Contrary to previous solutions, the EasyDEX supports atomic swaps, which means that cryptocurrencies can be exchanged directly without the need to deposit the actual coins in some form of escrow and use proxy tokens, pegged assets, or any other variation.
In the EasyDEX model, coins are exchanged directly from your wallet to the other user’s wallet and vice versa. EasyDEX also tackles one of the major issues with current decentralized exchanges, through the use of Liquidity Provider nodes (LP Nodes). These nodes ensure that liquidity is always present in the exchange. LP Nodes also act as servers for order matcher to a degree.
Much like the Agama multi wallet itself, another product by the SuperNet team, the EasyDEX permits users to interact with practically any coin that wants to be integrated. Not only will this exchange allow users to navigate the world of cryptocurrencies freely, it will also provide the ability to interact with fiat currencies through the use of the Komodo Fiat Currencies.
Currently in testing, the basics for the EasyDEX are in place. While there are still a few bugs to fix and several enhancements to made, including the LP node creation process, the core is already built and there will be a surprise new functionality that gives the EasyDEX a fundamental advantage over centralized exchanges, other than the aforementioned ones.
EasyDEX GUI
An independent Graphic User Interface (GUI), dubbed “Ugly GUI” has already been built for the EasyDEX. Although it is not the final GUI, it gives us an idea of how the EasyDEX will work. 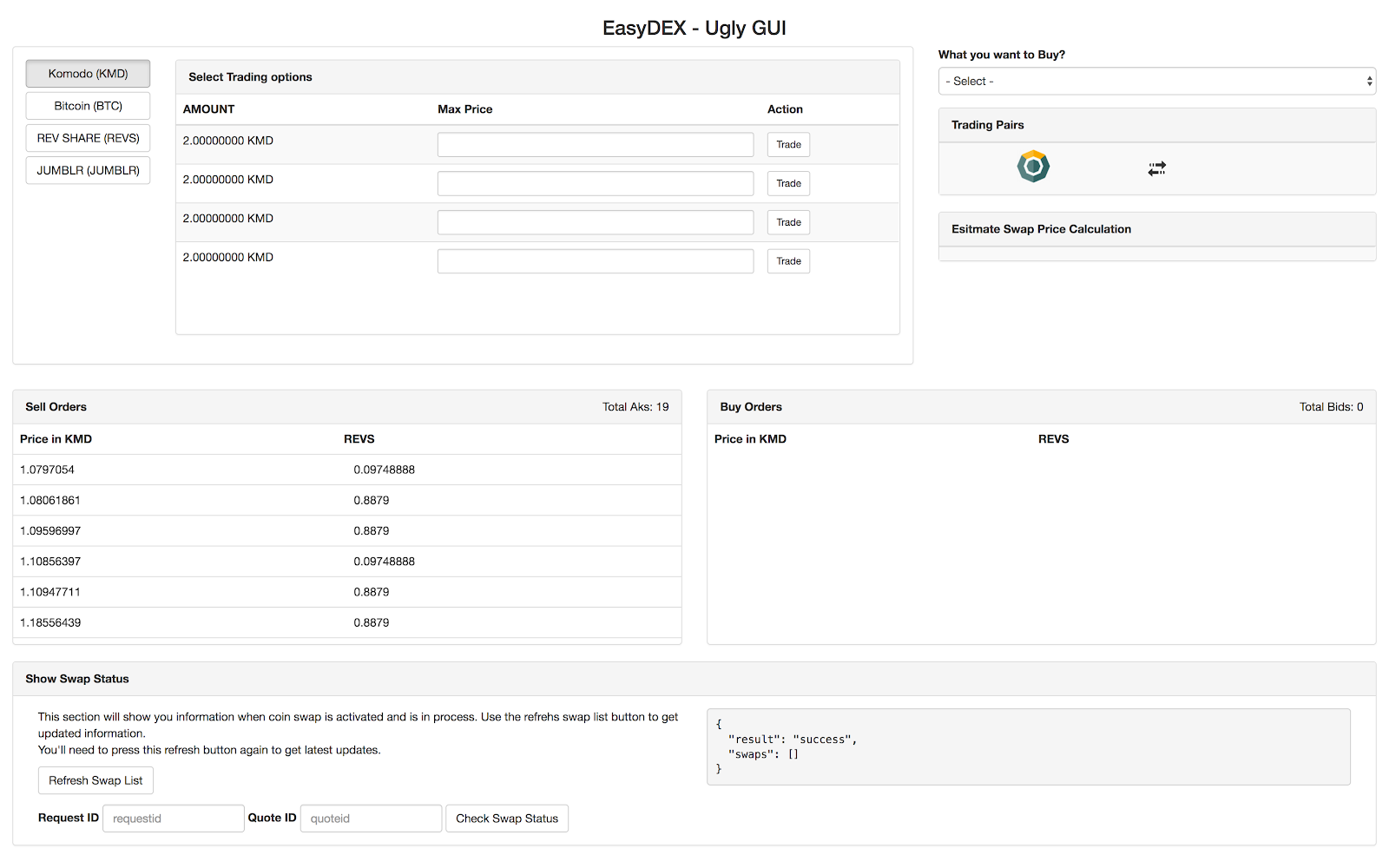