By: Kanoptx
In: NEWS
For the first time in cryptocurrency history, Ethereum has overtaken Bitcoin in U.S. Google search term popularity. Although it didn’t take long for Bitcoin to recover its position as the most searched cryptocurrency in the U.S.A, this moment marked a significant milestone in the history of Ethereum, which is growing rapidly. While Ethereum was able to rank higher than Bitcoin several times, it did so only for a few moments, as seen below:

While Bitcoin was able to maintain its dominance at all times in the worldwide search terms, it was overcome by Ethereum multiple times in the United Kingdom and Singapore. In South Korea, a country where ETH’s trading volume is bigger than that of Bitcoin’s, the Ethereum search term ranked higher than Bitcoin consistently.

Still, in Asia, Bitcoin continues to be the most searched cryptocurrency term in Japan, while in China, Ethereum overtook Bitcoin multiple times, possibly due to the recent addition of Ether to OKcoin and Huobi, two of the biggest exchanges in the country.

The recent upsurge in the popularity of Ethereum is undoubtedly connected to the price rally that is taking Ether to unprecedented heights. Currently sitting at $380, Ethereum has grown over 4650% since the beginning of the year, completely overshadowing Bitcoin’s 177% growth and positioning itself as one of the best performing cryptocurrencies in 2017 so far.

Ether’s growth can be pinned to multiple factors like the creation of the Enterprise Ethereum Alliance consortium, the prospect of new developments in the Metropolis update, like the implementation of ZK-Snarks and, of course, by the growing amount of Initial Coin Offering (ICO) campaigns that are being held through the Ethereum network, which are gathering millions of dollars every week.

Although Ether’s price rise is currently bringing a smile to the face of those who hold it in their portfolio, one must also question if such an accentuated growth is sustainable. Several members of the cryptocurrency community have shared their views regarding a possible altcoin and Ether bubble. WhalePanda recently published a blog post regarding the possible Ethereum bubble. He stated:

“If you’re a trader or investor, be realistic about the bubble. I know you hear this 100 times when you’re trading but: don’t invest what you can’t afford to lose.”

A shift in dominance?

Amassing a market cap of $36 billion, 80% of Bitcoin’s, Ethereum’s fast-paced growth is currently threatening to dethrone Bitcoin as the most valuable cryptocurrency by market capitalization.

Not only is Ethereum gunning for the top spot, the general cryptocurrency rally has also reduced Bitcoin’s dominance from 87% in January to roughly 39% today, something that has never happened before. In the meantime, Ether’s market dominance has grown from 4.5% to 31.38%. 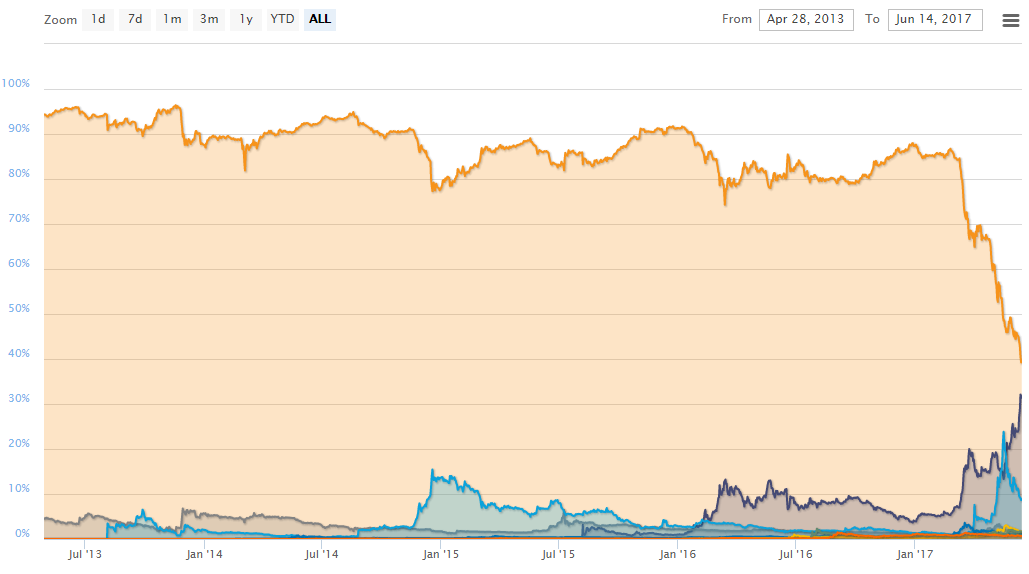 While it’s still unclear how the landscape would change if Ethereum became the most valuable cryptocurrency, it seems that a shift in dominance may be coming to cryptocurrency market.