Ethereum’s Market Price Is Over $350 Now 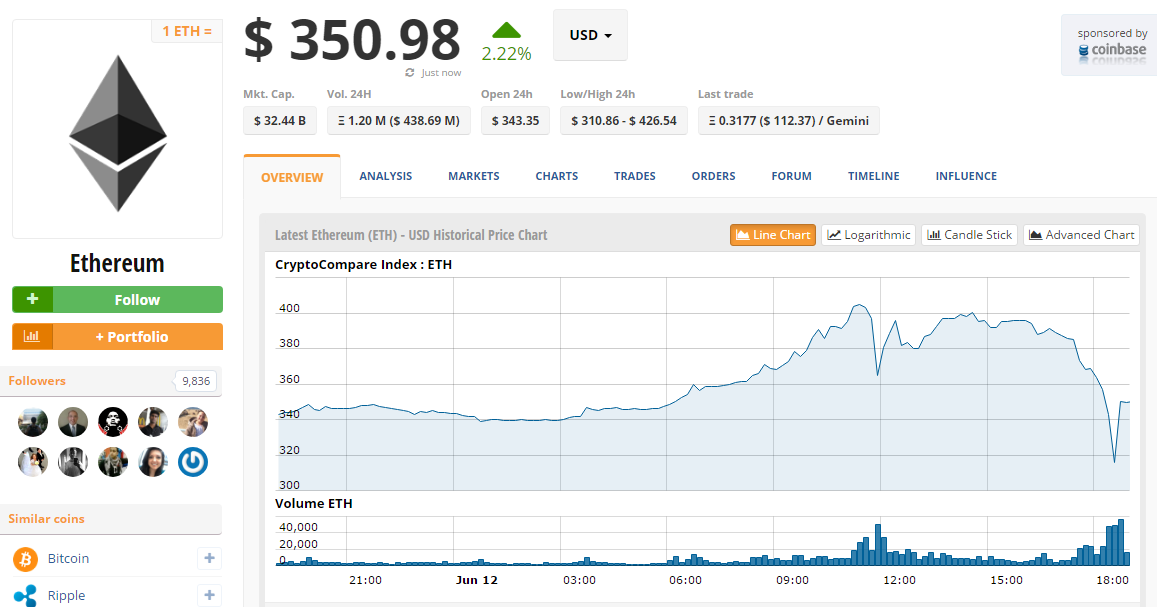 Existing King of Smart Contracts Ethereum has set another record yet again by being sold for $300, and then $400. Last month Ethereum reached another frontier when it sold for $200. Late afternoon on Monday, it even breached the $400 line but could not sustain it. At press time its market price was $350.98 with more than $33 billion market value.
Ethereum’s Future
This brings to mind some analysts perception that ETH will soon overtake Bitcoin. Their point is that a lot of entities are having real uses for the Ethereum platform and that will skyrocket its value.
It is insightful to note that Bitcoin market capitalization is now somewhere above $40 billion. Moreso, the mainstream is gradually discovering how prudent an investment in it is. It will take Ether a great lot of efforts to achieve that.
But what Ethereum beats Bitcoin with is its fast transaction rate. These days Bitcoin’s inability to facilitate transactions have become a matter of concern for many users.
Lest we forget many people were attracted to the system all because of the faster transaction and lower cost involved. The inability for Bitcoin to scale amicable gives Ethereum the edge to compete fiercely with it.
A couple of weeks ago, Vitalik Buterin, the creator of Ethereum met with Russian President Vladimir Putin at the St Petersburg Conference. It is believed the brief encounter has also influenced the upward trend of ETH prices.
Notwithstanding, the Asian factor cannot be overlooked. In recent times Japan and South Korea Crypto enthusiasts have developed an unprecedented appetite for Ether. Trade volumes have gone up in those countries like never before. In South Korea, reports indicate it is the largest Ethereum exchange market with a $335 mln daily trading volume and 38 percent market share.
Tweet
Share
Pin
0 Shares
2017-06-11
Previous Post: Civic | Balancing the Scale between Security and Accessibility
Next Post: SuperNET Tuesday Update 13/06/2017