The week behind was so rough but it has given way to a bountiful Sunday with most digital currencies making profits. On CoinMarketCap it is awesome to see everywhere being mostly green, unlike the red sea we mostly dealt with last week.

Only a handful of tokens is actually in red on top 100, and only one dip on top 20. In all 18 cryptos made downwards adjustment on the first 100. 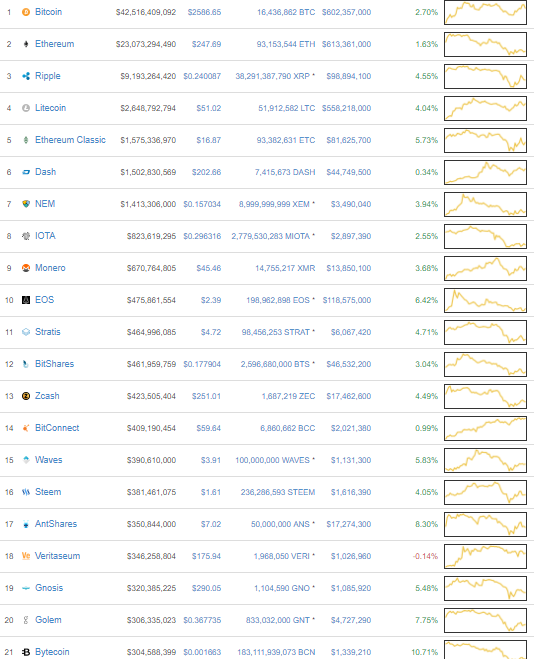 After all the accusations of scam, EOS is back on top 10 with the biggest gain of the day representing 6.42 percent. The Business to Business Blockchain application made history last week in the highest ICO record ever.

Market leader, Bitcoin has brought its price to $2586.65 and recorded an expansion of 2.70 percent. It appears the frontline for the upcoming scaling battle on August 1, is the $2500s.

Ethereum is being watched keenly this week if it could overcome the downturn of last week. The Smart Contract Trailblazer did not put smiles on its holders’ faces at all in the week gone by. Well, today it recorded the least gain on top 10 which was 1.63 percentage rate.

Meanwhile Ethereum Classic made it big with the 2nd most appreciated points. The decentralized Smart Contract platform was up with 5.73 percent. It took a great deal of battering during last week’s pouches of panics considering how its market price which was over $20 is now $16.87.

Refreshingly Ripple is trying to prove a point by increasing up to 4.55 percent. It is having a really bad time recently with a series of slumps.

Litecoin’s new found strength seems unstoppable. At the time of going to the press, it had leaped 4.04 to sell at $51.02. Last week Charlie Lee Jokingly posted on Twitter he should have resigned earlier from Coinbase to concentrate on Litecoin if he knew it could influence the price like that.

In the midst of last week’s gloom, Dash made some significant gains that propel it to dislodge NEM from number six. In fact, its market share was at its all high time. Their Business Development Manager, Joel Valenzuela, over the weekend told Core Media that Dash has been positioned for growth for some time now.

Noteworthy is the fact that IOTA has lost almost half of its value. When it hit top 10 three weeks ago, its market cap was over $1.5 Billion. On Sunday its value has dwindled to a little more over $800 Million.

What Is In Store?

Will this week be profitable as juxtaposed to the previous one? If today’s trend is something to go by, then we are in for good times. However, in Cryptoland, most things are unpredictable. Anything can happen here but we are at Core Media are confident of a fruitful week, and will definitely keep you updated about market trends.