Komodo Platform Raises Over 1000 BTC in One Day

Komodo, the privacy and security-driven cryptocurrency platform developed by members of the SuperNET community, has gathered 1267.78 BTC on first day of their Initial Coin Offering period, during which investors were entitled to the 25% bonus.

Komodo will, at first, focus on providing anonymous transactions powered by Zcash technology, zero knowledge proofs. These transactions will, not only be as anonymous as Zcash’s but also as secure as Bitcoin’s, given the notarization of the Komodo blocks on the Bitcoin blockchain. The notarization, called Delayed Proof of Work (dPoW), is achieved through the use of notary nodes, special nodes that migrate the information from the Komodo blockchain on to Bitcoin’s, and then back to Komodo, making any attempt to rewrite the Komodo blockchain a futile attempt (unless an attacker is also able to compromise Bitcoin).

This technology allows other cryptocurrencies to be as safe as Bitcoin while being much more efficient regarding energy costs. Komodo was meant to be launched as a NXT-style Proof of Stake cryptocurrency, but in order to minimize any changes made from Zcash’s code, Komodo will launch as a Proof of Work cryptocurrency. This means that Komodo is not as “green” as first thought of, but is still more efficient than Bitcoin, efficient as a PoS blockchain, safer than any other alternative blockchain and due to Zcash’s CPU and GPU-friendly hashing algorithm, Equihash, it will also allow mining to remain decentralized. Furthermore, the use of a Proof of Work mechanism will allow Komodo to transition to a fully decentralized blockchain on the off chance something goes wrong with the notary nodes.

Other blockchains are welcome to make use of this technology and to notarize their own blockchains on Bitcoin by using Komodo’s notary nodes. Using Komodo to notarize blocks on the Bitcoin blockchain has the advantage of being cheaper, given that the third blockchain is not required to pay Bitcoin transaction fees. Komodo notary nodes will be elected by the community according to their reputation, resources and previous performances on the testnet. Read more.

“Community members that want to run one of these notary nodes are advised to make this interest public as to gather votes from the investors. These votes should be based not only on the user’s long standing reputation within the cryptocurrency community, but also on the candidate’s ability and experience in running serious serves. Notary nodes receive a monthly wage of ~$500 (to pay for expenses and as a reward) for the effort and resources contributed. Voters can also use the testnet KMD as one metric in evaluating a notary node.” on Komodo Steemit.

The Komodo ICO will last until the 20th of November. Until then, users can exchange bitcoin or other altcoins supported by Shapeshift and they will be able to enjoy investment bonus, as so: 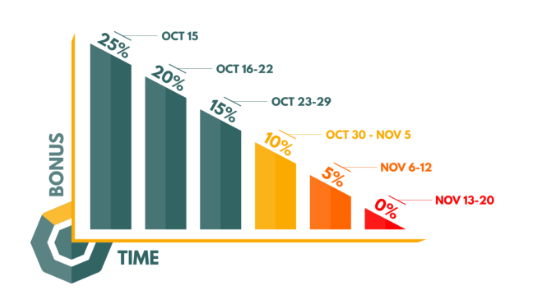 You can find out more about Komodo by joining the community on Slack or Bitcointalk, and by reading the Delayed Proof of Work whitepaper. You can also find blog posts regarding the development of Komodo on Steemit.