Making Sense of Free Tokens in your Waves Wallet

If you’re Waves token holder and you use the Waves wallet, then you may have noticed a bunch of different assets on your portfolio section. Although we all love “free money”, those that can not keep up with every single Waves Platform update may be wondering what exactly these are and what they do?

Well, worry not because CoreMedia will bring you up to speed on all the important assets that you may have received as a Waves token holder and/or Waves node/leaser.

Some of the assets we’re going to talk about like the Waves Community Token, Miner’s Reward Token and Bitcoin Token, were introduced by the Waves team, while others like Ripto Bux, Mercury, WavesGo and more were airdropped through the Waves Platform.

So, let’s take a look at the block explorer and see the tokens we have received so far both through mining and by holding Waves tokens: 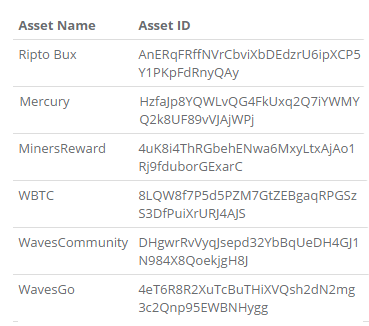 Ripto Bux is a dual-blockchain asset that exists both in the Waves and Ethereum blockchains through the use of Incent’s Blockswap technology. Ripto Bux has established itself as the defacto tipping currency on the Waves Platform slack, the Cryptocopia slack, and the Incent slack. By utilizing the Waves Asset Tip Bot, one can send asset/tokens instantly on the Waves main-network by using simple text commands. 200 million RBX tokens have been distributed thus far via airdrop to Waves token holders – Click here to learn more about Ripto Bux.

Mercury is part of the Darcrus project. It is used by the Jupiter private blockchain to timestamp blockhashes on the Waves public blockchain, thus making it possible to store data on the Jupiter blockchain for a low cost, while still allowing the information to be publicly verifiable. Mercury was airdropped to all Waves token holders and Darcrus token holders. – Click here to learn more about Mercury and Darcrus.

Waves is an inflationless system with limited supply, no new coins are ever issued through mining. Instead, full nodes and leasers are rewarded with transaction fees. While keeping standard transactions fees low, and in order to incentivize more PoS mining within the network, the Waves Platform team issued the MRT asset. This asset is an extra incentive to help maintain a full node until the network becomes widely used and is also an additional option to enable miners to vote on different network settings in the near future.

Additionally, one of Waves unique features is that transaction fees can be paid in custom assets, however, nodes generating blocks have to accept the token as payment first but also need to be persuaded to do it. MRT can be used by token issuers as an automated way to distribute extra incentive to active miners. Click here to learn more about the Miners Reward Token.

WBTC is a Waves custom asset that is backed 1:1 by deposited Bitcoin. You can get WBTC by depoisiting BTC through the Bitcoin gateway found on the Waves wallet. But why did you get some ?

The Waves Community Token (WCT) is an multi-purpose asset issued by the Waves Platform team. It serves as a tool for community assessment of crowdfunding campaigns and  to incentivize long-term holding of the Waves token.

Projects launching tokens on the Waves platform can request different services, exchanging these for a certain share of their overall token supply, which will be distributed to WCT asset holders as rewards. This system ensures that there is both demand for the token and that it can also be used to reward token holders. The Services that can be exchanged for WCT include business side verification, Proof of Concept verification, token specs advice, help with testing, help with product and services integration, and an introduction to community.

The WCT is being distributed to Waves token holders monthly. Click here to learn more about the Waves Community Token.

WavesGO is a Waves Platform blockchain explorer. Its operators issued the WavesGo asset on the Waves blockchain, a token that features a profit sharing system where WGO token holders will receive a share of earning from the ad space renting, selling WavesGo tools, white label solutions for faucets or LPOS pools, API, BI system premium access and any other future service that requires WGO. Token holders will also receive a share in Miners Reward Token (MRT) from the earnings generated by the pool. The WavesGo asset was airdropped to Waves token holders – Click here to learn more.

All of the aforementioned assets can be bought and sold through the Waves Decentralized Exchange which can be found in your Waves lite client.