Online advertising is a problem as big as the industry itself. However, Mass Network plans to solve this problem by letting users take part in revenue this industry produces, and applying the ancient old saying “If you can’t beat them, join them”.

Mass Network is Blockchain-based project that will help people monetize their browsing data and attention by allowing users to install a plugin that shields them from ads and allows them to set a price for seeing said ad and/or for sharing their browsing data. – Learn more

The team is currently hosting an Initial Coin Offering period, in which 70% of the total supply (1,000,000,000,000) of MassCoins, a colored coin asset issued on the strongest and most popular blockchain: Bitcoin, will be sold to investors. This ICO will last until the first of December and the distribution will occur on the following day. The 10% investment bonus period has recently been extended until the 1st of November.

While the software and project development is currently ongoing and progressing according to plan, there have been some changes in the leadership of the project. Mycelium CEO, Alexander Kuzmin has recently acquired the project for $1.1 million and committed to further advance its development and reach as the new CEO. No changes will be made to the distribution of MassCoin, but some improvements will be made to the overall project. Changes to the current website will be made, a new website for webmasters to understand the benefits of Mass and how to leverage those benefits will be opened along with new channels of communication like Slack, Weibo, Telegram, WeChat and a youtube channel. Furthermore, there may also be some new changes to the internal development team and management team.

“My involvement in Mass does not mean Mycelium technologies will have any predetermined preferences compared to any other solutions that can add value to the payment system Mass needs to incorporate. But, of course, I will use all my expertise and connections to improve Mass for those involved directly as well as for the bitcoin community at large.” Mycelium CEO, Alexander Kuzmin

The plugin itself is currently being developed (faster than expected) and a basic alpha-release of the Mass plugin prototype has recently been released, which the team encourages users to try out and test in order to generate user feedback, which is crucial for a community-driven project like Mass Network. The github repository can be found here, and users are welcome to download, build, and add this extension to their Chrome browser (a compiled version will soon be released).

The prototype includes some of the major functionalities in the Mass system:

We tested this plugin prototype ourselves. It’s rather intuitive and easy on the eyes. While the system itself is not yet put in place, users can get a pretty good preview of the software which allows you to choose filters and rules to choose which types ads the user will see. Users can also choose to whitelist certain schemes, like the chrome-extension-scheme. Furthermore, Mass also ranks websites according to the amount of ads they have and lets you choose which types of websites you’re willing to view ads and accept payment from. Mass also allows you to block elements of the website you’re visiting at will, meaning that you can hide any ad. 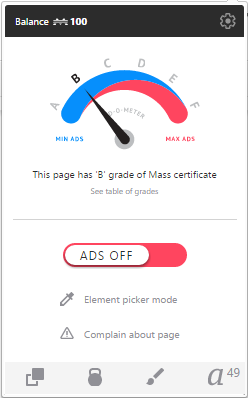