MASS Network | How Blockchain Will Save the Ad Industry

Online Ads have gotten out of control. It is literally impossible to surf the web without suffering through a horde of irrelevant and intrusive ads or without an ad blocker, which will often mean you will be blocked out of some of your favorite websites. Unlike Ad blockers, The Mass Network recognizes the value of user attention and data and is willing to help you monetize it and to create an ecosystem where advertisers, webmasters, and content consumers can be satisfied.

If something is free, it often means you’re the product. This is mostly true on the internet and while you’re not the product directly, your data and attention are. The Mass Network, a project designed by leading experts in the fields of advertisement and blockchain technology, wants to balance the scale and allow users to be rewarded for their time, making the online advertising business model more transparent, fair and sustainable for content consumers.

Using the Mass Network software users are able to protect themselves from ads and data trackers, and to broadcast the price they are willing to accept for revealing their information, thus creating a market for buying and selling user attention and information. If the Ad provider or webmaster is willing to accept the price asked by the user, the ad is then displayed and the user will be paid for seeing it. The payment is made in Mass Coin, a colored coin asset that will be issued on the Bitcoin Blockchain and will be used as the currency of the Mass Network. Using a Bitcoin asset has the advantage of not having to create and maintain an alternative blockchain. 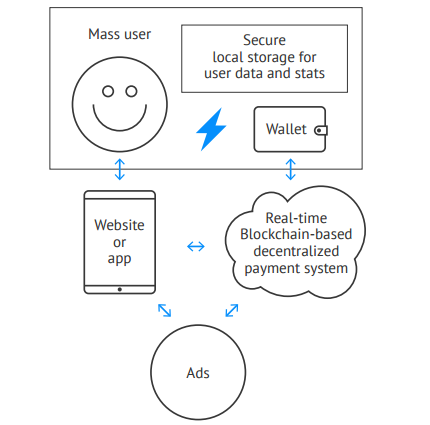 In order to fund this technology, and to create a user base and early investment opportunities, a one-time Initial Coin Offering period is being hosted by the Mass Network. In this ICO 70% of the 1,000,000,000,000 total MC supply will be sold, while the remaining 30% will be kept by Mass for its internal use. The ICO will last until the 1st of December and Mass Coins will be distributed the day after, early investors can still take advantage of a 45% bonus that will last for 1 more week. The software release itself is set to take place during March of 2017.

The Mass system allows users to take control of the internet and to choose how much information they are willing to share and how much this information is worth, thus enhancing the user browsing experience, while still allowing advertisers and webmasters to profit from their work.