“One Token Will Exceed GDP Of Top 50 Economy” – Vinny Lingham

Vinny Lingham, CEO of Civic Keys has predicted that within three years, at least one token’s market cap will exceed the GDP of a top 50 economy. In a Twitter post on Saturday morning, the Bitcoin price forecast pundit indicated he wanted to make a dinner forecast. 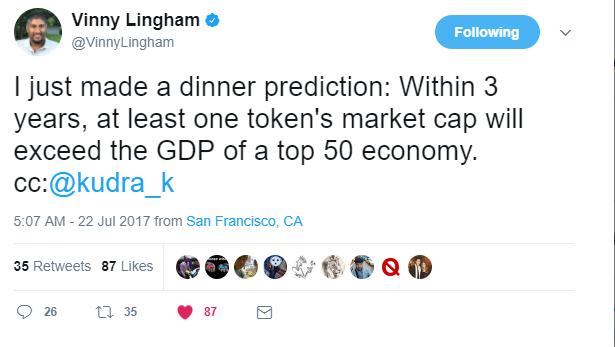 Vinny Lingham, who is a prodigy when it comes to Bitcoin price predictions, caused a stir with the post as people in the Crypto community expressed various opinions. There were heated debates over the statement on Twitter and various platforms.

Whilst others were of the view that this is not possible, other schools of thought maintained that it is realistic when considering the potentials of some tokens. However, it is prudent to note these arguments were very respectful and civil with a few exception of some crude language.

Nelson M.Rosario of Keybase.io in a response to the post on Twitter doubted the assertion. “With all due respect that doesn’t make any sense,” Nelson opposed. “At present New Zealand has a $198 billion economy ranked 50th worldwide.” Nelson believes unless Vinny is including BTC as a token, there is no way that a token (read ICO) has enough interest or activity to challenge an economy.

“Those who agree are bullish, and those who disagree bearish. Simple. But the 200B$ question is: WHICH token is it going to be?!”

The statement from Vinny also generated a discussion on Bitcoin PowPow, a Cryptocurrency Whatsapp group which was also interesting. Once again opinions were divided here and there. “He thinks tokens will replace equity, so if you agree with that, then he has a point,” Nicosey Suggested.

For Omar Shibli, totally, FinTech companies have been mostly classified as MSBs in the past, now it is just SaaS companies. “It’s not that impossible, this translated to 5x return in 3 years, which reflects $14K in price”, he said.

Priyabrata Dash, Analyst for IBM wrote that when he read the post he wondered who was crazier, Vinny Lingham or John Mcafee.

Anyway, Dusty agrees that it is possible, but anyone claiming to “know” the future with predictions is full of hot air and can’t be trusted in his opinion. He intimated:

“I get the feeling that he’s been reduced from the ‘Bitcoin Oracle’ to the Bitcoin guessing guy and now he’s just throwing out wide ranging predictions. Honestly, he has no better idea than any of us.”

Well, in Cryptoland, anything is possible and with time we will know who is right or wrong. But as always Core will keep you updated.