By: Kanoptx
In: Legal, NEWS

Voting online. It’s a dream for the laziest ones and it could also facilitate life for many people like administrative oversight teams and obviously for the voter. While in some countries like Estonia, Germany or Australia voting online is already a reality, in Portugal the way to go still long.

However, it looks like the Portuguese government wants to innovate. Not in self-governing or legislative election but on the scope of other election that doesn’t require so much voting responsibility – the Portuguese Participatory Budgeting, a national level initiative through which the citizens can have support and see their ideas and projects being executed by the Government.

In a recent conference, Maria Manuel Leitão Marques, minister of Presidency and Administrative Modernization, revealed in her presentation one slide that has aroused the interest of economic journal ECO. She asked:

“Is it possible to use the blockchain technology to register online votes on OPP and guarantee the integrity of final results?” 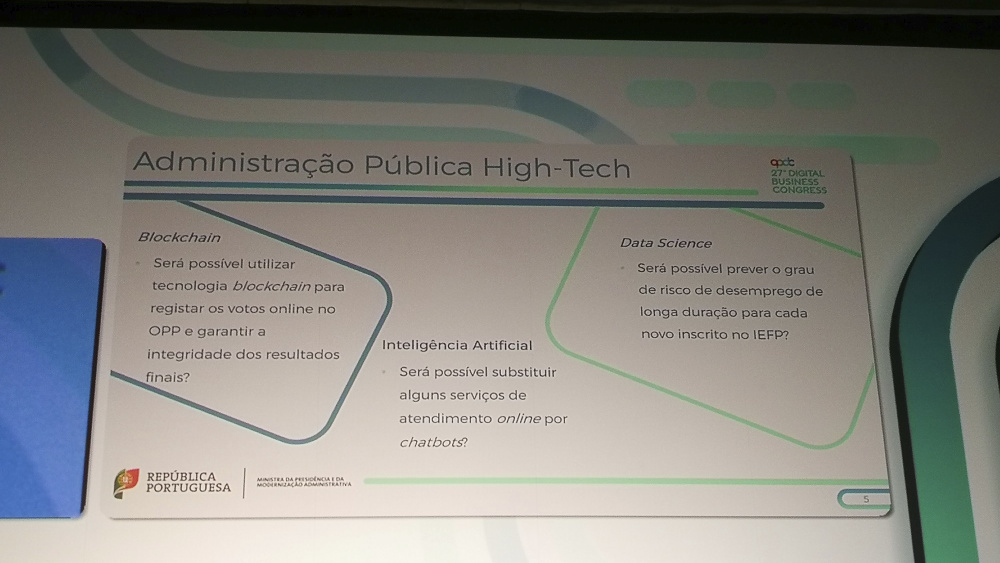 What does this imply? Blockchain technology allows sharing one database with many users and it could be being regularly updated by them.This way, information is not centralized in a unique entity (in just one server), being public and shareable with all – which guarantees transparency, immutability and security.

Theoretically, the blockchain could be a good solution for secure, transparent and optionally-private voting, as happen on Pixels Camp, one of the biggest technology events in Portugal. Technology like Ring Signatures or Zero Knowledge proofs can be used to keep citizens’ data confidential.

The Portuguese Government wants to use new technologies like the blockchain, but recognizes a dire need to test the specifics before using these innovations, as said by ECO. Other questions raised by the minister were chatbots, informatic algorithms capable of having a conversation with a human and execute operations on command, measures that have already been taken by other message platforms like Messenger or Skype. “Is it possible to replace some online attendance services for chatbots?”, was written on the same slide of Maria Manuel Leitão Marques.