It is a terrible Sunday in Cryptoland with everywhere scattered with scarlet red. One might think there is a war going on between savages as the casualties are overwhelming and smelling of an impending market recession.

The noses of major players are oozing with blood and it is a sure bet people are checking their Crypto bank account balances to know how much they are losing. It is one those times where there is only despair in the global digital family. 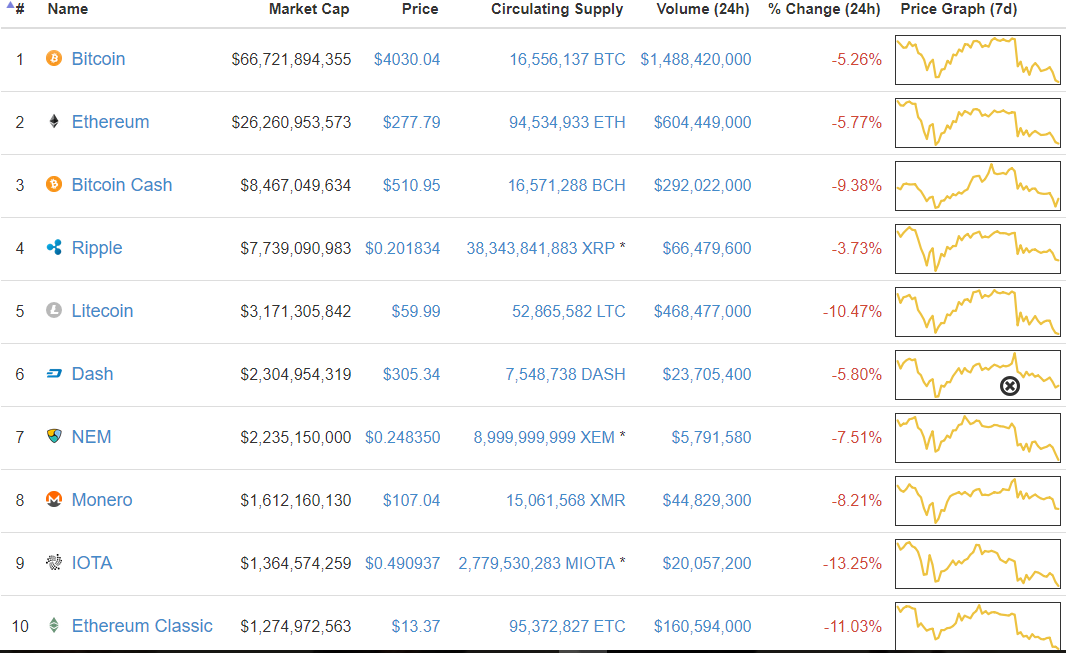 On top 10 not even a single currency is experiencing any kind of growth. All of the entities there are on their knees helplessly. Market leader, Bitcoin is down 5.26 percentage point bring its market cap to the $66 Billion range.

The biggest fall in the elite zone is IOTA which is the 9th most valuable cryptocurrency. It has dipped whopping 13.25 percent, followed by Ethereum Classic who is at the 10th spot with 11.03 percent.

Holders of the Silver of Cryptocurrency, Litecoin might be shedding tears as their asset has also slid 10.47 percent. In fact, Ether’s price has dwindled to $277.79.

Another notable loss on top 10 worth mentioning is newcomer Bitcoin Cash. The Bitcoin fallout is ranked 3rd with negative 9.38 percent as well as Monero who has thrown away 8.21 percent.

It is disheartening to state that on the top 100, only 10 virtual currencies are in the green. It is heartwarming to say that in the midst of the gloom, Singular DTV is up by 28.45 percent The Crypto that aims to change the face of Hollywood is actually 54th most expensive crypto.

Civics, the identity digital currency is at number 41 gained 23.52 points. CloakCoin is boasting 16.36 percent in this morose times.

It is difficult times for the revolution but this is not a new thing. To be frank, we have seen worst moments than this, and in Cryptoland anything can happen at any time. It will be no astonishment if, by sunset, the market is in the green again.

However, another question we need to ask ourselves is are we heading into a scary depression? The ecosystem has been spared that since the days leading to Bitcoin’s acrimonious split.

Anyway, we have always survived and whatever it is, we will survive again. Definitely, sooner than later, there will be smiles on the faces of all the family members of the global cryptocurrency family.