On Wednesday when many cryptocurrencies made some admirable accruals, everyone thought the markets have emerged out of the Crypto Massacre that has been trending from the previous week. 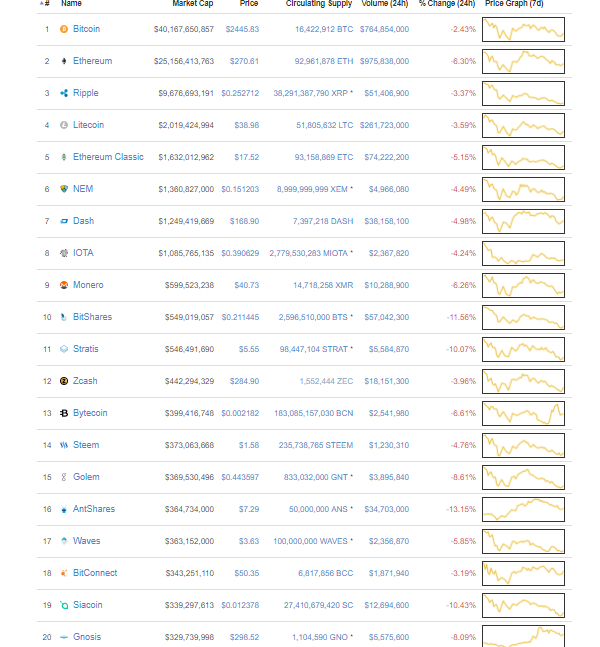 On Wednesday when many cryptocurrencies made some admirable accruals, everyone thought the markets have emerged out of the Crypto Massacre that has been trending from the previous week. In fact, almost everywhere was green and this even continued into Thursday.
Alas! The winnings didn’t last and the markets drifted into slumps once again. The battering from Friday has left in its wake so many damages.
Curiously, the pattern has not strayed either. Anytime Bitcoin goes down, 95% of the top 20-30 cryptocurrencies spontaneously follow suit.
As at 13:00 GMT Sunday, not a single gain was posted on top 20 on CoinMarketCAp. For top 30, only Tether made a meager 0.20 percent upward increment. Could you imagine just nine digital currencies were in the green on the first 100?
The tragedy is that Cryptoland is in a quagmire state with stagnation biting deep inside its core. It has always overcome but the bloodshed in recent times is becoming so prevalent and volatility has become its bedmate.
How The Giants Fared
In a week, the market leader, Bitcoin, has lost almost $225 of its market price. Losing 2.43 percent on Sunday, it was sold for $2445.
Among the giants, Ether has seen one of the biggest casualties for the week. Late Thursday and throughout Friday, it posted the biggest loss amidst his peers on the top 10. Almost $60 of its price from last week has been lost to the crash.
Meanwhile, Ripple is still on the slippery path losing about 17 percent from last week. Segwit trailblazer, Litecoin nearly took its selling rate to $50 but now it has to be content with $38.
It is a pity, just like everything that is happening to see ETC price in the teens again. It went up as high as $23. Dash is also in no better position. More than a $100 Mln of its market value cannot be accounted for at the moment.
Another entity that took a huge pinch-hitter is the newcomer to the elite zone, IOTA. On Saturday alone, it lost 20 percent market share. When it hit the top two weeks ago, the Blockchainless digital currency was holding more than $1.5 Bln in Market capitalization but at the moment, it holds a little more than $1 Bln.
Going Forward
Analysts believe the crunch will come to a halting end soon, however, the volatility in the market does not auger well in attracting newcomers to the Crypto space. To have four market crash in a little more than a month is unsurmountable.
Well, this is Cryptoland where anything can happen overnight. But it is indeed a Red Sunday and we are looking up to a green week where all crypto lovers will be laughing to their crypto bank accounts to check their balances.
Tweet
Share
Pin
0 Shares
2017-07-02
Previous Post: MASS.cloud allows Proof of Stake & Masternode mining without extreme volatility
Next Post: Waves Partners with Deloitte to bring Blockchain Tech to the Mainstream Stage