Roger Ver Refers To Charlie Shrem As A Jerk 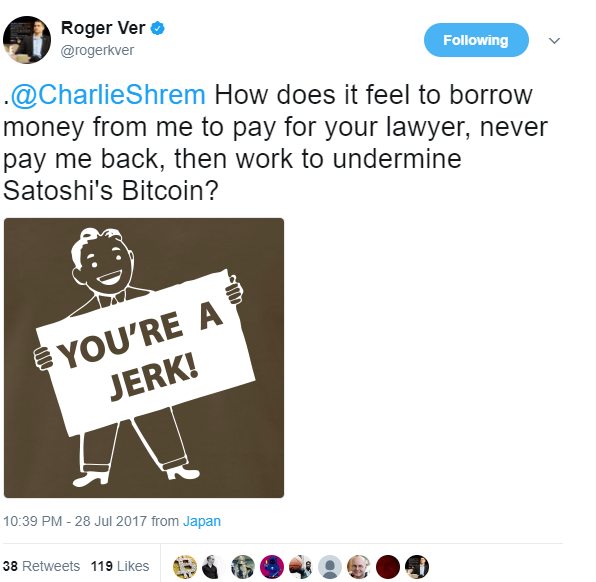 The acrimony surrounding the Bitcoin Network Scaling keep deepening. On Saturday, Roger Ver aka Bitcoin Jesus, one of the leading proponents of big blocks cast a slush at Charlie Shrem for opposing UAHF. In a Twitter post, Roger called Charlie a Jerk and castigated him for not paying the money he borrowed from him to pay for his trial and yet he is working against Satoshi’s Bitcoin.

In response to the post, Tuur Demeester, Editor in Chief at Adamant Research and an ardent Bitcoiner stated that Charlie has a right to Freedom of Expression. “Charlie was very isolated and vulnerable in the months before his sentence. Regardless of any debt, he should be free to speak his mind,” Tuur opposed.

Charlie, who was incarcerated for two years for aiding and abetting the process of an unlicensed remittance entity linked to the famous Silk Road marketplace, also commented on the post. “Roger has totally changed. He even denied my wedding invitation,” he wrote.

However other commenters urged Charlie to pay back his debt. “Maybe if you pay him back he’ll go,” Tony DaSilva suggested.

Checksum0 had a very scathing remark: “Look like prison taught you nothing in the end. Have fun continuing the destruction of Bitcoin, we will wave from the other side.”

Immediately, Charlie posted a transaction ID link indicating he has sent Roger $5000 of Bitcoin. This did not go down with JuicyGrab of Smartcash who descended on him.

“Why not pay back the same amount of Bitcoin he sent you?,” JuicyGrab asked. “He now has less because he chose to help you.”

But Andrea Chiavazza disagreed. He says:

“Going public with a debt without even having asked him to repay is bad taste. Just because he doesn’t agree with your distorted vision of BTC.”

Then again, Tomislav Dugandzic waded in when Charlie said Roger could have easily email and ask for it. “Did you email Roger offering to pay him back? Or did you silently just forget about it? The person who borrows money is the one who emails”.

The heated exchange became light when others started throwing in some jest. “Charlie just did what Satoshi wanted us to do. Settle debts over Twitter. R u happy Roger?” That was from Optimist.

“Charlie, why didn’t you send him his money in BCC”, Douglas enquired. Bill Keck added flavour when he stated: “Great episode of the housewives of #bitcoin, thanks for keeping Saturday night entertaining…”

The funniest comment that solicited the most laugh was from Nelson who said Charlie should just wait a few more days and pay him in Bitcoin Cash. Well, tomorrow is the d-day and most community members are hoping sanity would finally prevail.