The Chinese Government is continuing their attack on cryptocurrencies with rumors surfacing of a list of foreign exchanges that are set to be blocked by the “Great Firewall of China”. Exchanges such as Bittrex, Poloniex, Kraken and many more are rumored to be targeted by the Chinese Communist Party, according to an unverified notice.

According to Cointelegraph, the plan is to:

“1. To block all access to important platforms such as Coinbase, Bitfinex, and Localbitcoins, including access through web, apps and APIs,

3. To abandon Bitcoin’s ledger synchronous data by DPI recognition on the Great Firewall.”

The document also states it will also target mining pools by trying to eliminate the communication between the mining pools and users outside of China, severely damaging the ecosystem.

Finally, the document also states that VPNs and TOR are to be closely monitored.

If rumors are true, this will be the third major move against Bitcoin in the space of only a few weeks. The current blitzkrieg is an incredible example of how a strong centralized government can at the click of a finger change the complete landscape of an industry.

The first strike was on Initial Coin Offerings (ICOs), where the People’s Bank of China declared that the selling of decentralized tokens is “illegal and disruptive to economic and financial stability”. The second strike was the forced closing of all fiat-to-Bitcoin exchanges in China. Clearly, there are some major moves at play and there is wide speculation on why it was so sudden.

Peter Bergstorm gave an interesting insight as to why China decided to attack Bitcoin and cryptocurrencies in such a vicious manner. In his blog, he stated: 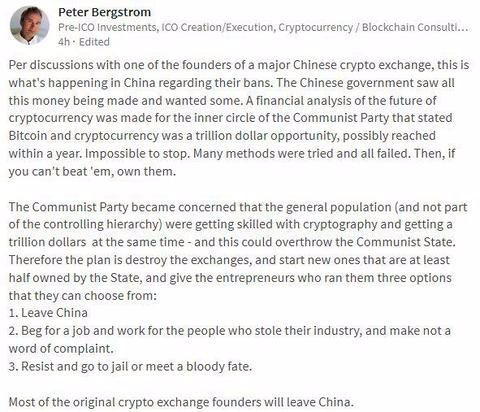 Peter’s insight into the current events answers a lot of the questions surrounding the current blitzkrieg on the cryptocurrency industry. While this scenario cannot be confirmed, it does seem to be likely considering the history of the Communist Party of China and the moves made by the PBoC.

What this means, however, can actually be a positive rather than a negative. The Chinese government sees Bitcoin as an important threat that can only be contained if they take full control of it. It is not a coincidence that once Bitcoin began to break a new all-time high that only then, the Chinese government took action.

The volume in Bitcoin trading in China has, however, fallen into the shadows with Japan and South Korea taking over the Bitcoin giant in the past year, following the first crackdown on exchanges by the PBoC. Once again, this is a strong indication that Bitcoin is gaining a global presence as it was once believed China was the driving force behind Bitcoin.

Despite the problems in China in regards to Bitcoin, Hong Kong, a region in China that holds a special status because of its extremely free market economy has seen a huge interest over the past few weeks. The likely situation is clear, most, if not all, exchanges, mining pools, and Bitcoin lovers may migrate to Hong Kong.