It’s Tuesday again which means that it is time for our weekly update! As you probably know, KMD has been rallying strongly on the price chars, a subject that we will talk about in our weekly market roundup. We will also discuss the recent interview with Lootz, our Komodo Investment research and Komodo’s financial platform roadmap. Lastly, we will also talk about the new Komodo Swing wallet.

Not all is perfect, however, we will also talk about a recent attempt to attack the Komodo Platform which took place this last week.

In a recent interview, Jl777 and lootz had a great conversation about some of the tools that SuperNet is creating, namely the Jumblr decentralized mixer and the new scalability solution called ‘peerchains.’ – Click here to listen to the interview.

Our scalability solution connects chains together with SuperNET’s atomic swap protocol. On the core level, the funds can freely move from chain to chain with a lock/redeem system that is similar to how the Komodo Currencies work. We will be conducting a public stress test with our Peerchains solution. We are already making basic preparations for it, stay tuned for more info.

Although SuperNet is mainly focused on building new and disruptive technology for the decentralized future, outreach and marketing is essential in order to assure that everyone has access to this same technology. As so  Komodo’s marketing manager Audo joined Lootz for a live talk with the aim of spreading awareness about the Komodo Platform. Click here to listen to the interview.

The interview also aims to inform all Komodo investors in order to ensure everyone understands the platform’s vision/potential. The report will also make it easier for various third parties to look into Komodo. With this package, we can approach different media outlets and let them know about our willingness to answer any questions and take part in possible interviews.

Since the ICO, we have successfully launched the dPoW security layer as well as the distributed Notary Node network. We are currently working on Komodo Currencies and Peerchains. Smart Contracts are also being looked over. The future looks bright for Komodo and for the blockchain space in general! 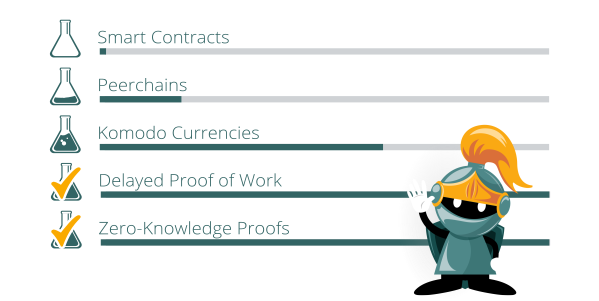 Although Komodo is featured in the Agama Wallet with a graphic user interface and several additional tools, it’s always nice to have alternatives. Besides, Agama Wallet is still being developed

As so, SuperNet team member, ca33 has been working on a Komodo version of the Swing wallet. It has a graphic user interface and allows the user to import a KMD seed. You should still backup your wallet.dat file while using it, however. From now on, users are advised to use this wallet.

The wallet will be launched later and can be found here.

Last week, the Komodo Platform suffered DDoS which resulted in several nodes being brought offline. As a result, we disabled the withdrawals and deposits on the Bittrex exchange as a safety measure. The situation is almost back to normal and the small bug has since been fixed!