SuperNET and NXT community member Audo this week released a comprehensive annual report on both SuperNET and NXT. The report covers everything from crowdfunding & assets to the vision each project holds for achieving mainstream adoption, The report is complete with charts, graphs, and statistics on dividends paid out on the NXT platform in 2015. 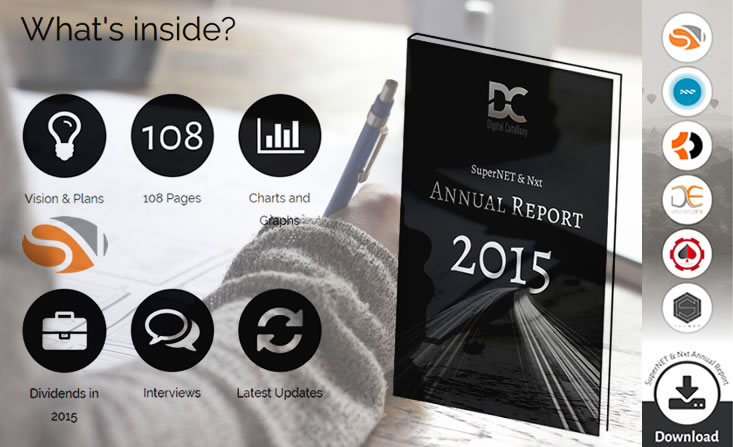 Those paying attention to the price of SuperNET will have noticed a huge boost in value over the past few weeks. At its lowest point, SuperNET was trading below 100 NXT per asset. Fast forward a few months later and the asset is now trading above 200. It is true, JL777 has been buying a lot of these assets. However, there has been a great deal of buy support.

With JL777 buying up SuperNET assets, it would be a good bet to assume that SuperNET is getting close to release. With SuperNET’s team working on Iguana, we may see Iguana being released very soon.

Avidayal91, GUI developer, had this update for the Iguana wallet:

“Completed on wallet (specific to v0.1)

Remaining on wallet (specific to v0.1)

How does Iguana download so many GB so quickly? Doesn’t it have to rely on how fast the other nodes upload?

But probably not worth the effort, since it seems fast enough.”

“The best time I have so far is 20 minutes for full sync all the way to real time blocks. But that is on a monster machine. 12 cores, SSD and 128GB RAM, 1 gbps connection. High end VPS. But with 1gbps connection and SSD, I think 32GB RAM is enough for half hour times.

Actually the bulk of the data is transferred in 10 minutes. 91408.43 -> 91MB/sec sustained for that minute. Still need to get the “last mile” to be much faster. Bitcoind takes about an hour to update the last 1000 blocks and unfortunately iguana is taking as long for the last fractional bundle. Which seems silly when 404000 prior blocks are processed in half hour.“