The Salus Project | An Interview With Its Founder

What was your motivation for creating such a unique coin? The concept behind Salus had is something I had been thinking about for well over a year. Poking holes at it, brainstorming with others and at the end of the day, the concept worked in my head, I just had to put it in practice.

What was your motivation for creating such a unique coin?

The concept behind Salus had is something I had been thinking about for well over a year. Poking holes at it, brainstorming with others and at the end of the day, the concept worked in my head, I just had to put it in practice. Other coins/tokens were starting to pop up and what they offered as a whole package was similar to some of the bits and pieces of what SaluS includes in its system. SaluS also offers many ways for investors to utilize services they already use on daily bases and help their investment grow at the same time. “Help Yourself” is term I like to use in my update posts.

After some research, I found that Salus coin made revenue from multiple areas. Could you go into some detail on what they are and how they gain revenue?

In order for SaluS engine to work, there has to be constant stream of revenue, no matter how big or small it is and fortunately there are many ways to achieve this utilizing by altcoins and crypto services. Profits from these services are used to increase SaluS BTC reserve, which gets used for mainly buying back SLS from the market, investing in other altcoins or crypto services. Main goal is to have enough BTC in the reserve, at any given time, to buy back every single SLS in circulation by placing a buy back wall, above ICO price. However, as reserve grows so will the buy back wall. End goal is to Increase Net Asset Value (NAV) by various means.

Proof of Stake (PoS) coins: SaluS portfolio includes handpicked PoS coins for long term staking and each one generates certain amount of interest. Stakes are sold on regular bases to increase the reserve.

Cloud Staking Service: I had launched the first of its kind PoS Pool service for HyperStake coin back in October 2014, due to a demand from the community for such a service. Since it was hard for small amount holders to stake at a decent rate, the pool service combined their coins in order to create larger blocks for better chance at staking. After a while this service evolved to serve other demographic, “Private Pools” for larger stake holders for reason that I will mention shortly. Over the years, by stacking various coins and researching the specification of each coins, I had found ways to gain advantage in staking those coins. Some were simply creating specific range of inputs and some are modified wallets. At the end, the advantages gained by these methods easily outweigh the fees and I have gotten very positive feedback from those who have taken advantage of this service. Most of the people using this service are the one who have no time to research each coin for optimum staking or the resource to dedicate 24/7 uptime with redundancy for their coins. Let a lot spend time on each coin splitting/merging blocks for optimum stacking on scheduled basis. Another advantage SaluS has with staking is what’s called, “Whaling the network”. SaluS is on top 10 rich list for most coins listed within the portfolio, this gives us certain advantages when it comes to staking amount and/or staking rate.

Trading Coins: These are coins listed within SaluS portfolio that are not necessarily PoS, but they are coins with decent volume, which are preferred for day trading. All profits made from trading goes to SaluS reserve.

Affiliate Programs: We encourage for everyone, especially those who are invested in SaluS, to use the affiliate link provided within the OP to sign up for services/sites that they use. This way, they can generate additional source of revenue for SaluS by using the same services that they will be using regardless. In a way, they help their investment grow.

Mining: A link or a one click miner will be provided for those who would like to contribute the SaluS hashrate for mining CPU (for now) coins. By launching the miner, it will utilize a single core CPU, unnoticable to some users given their PC specs. However, as these numbers grow so will the hashing power of SaluS and of course bigger revenue for SaluS. Another way for investors to help their investment grow. At the moment SaluS is mining HODL coin, which is currently CPU minable only.

MultiPool Mining: Since SaluS is pure PoS coin, it cannot be mined, however, thanks to multi Pool Service provided by Hashgoal.com, SaluS investors can GPU/ASIC mine various algos on Hashgoal.com and receive their payouts in SLS. This service greatly helps SaluS as it creates demand and volume by buying SLS from the market in order to payout investors, yet another way for them to help themselves.

Foundation Transaction Fee: This is a unique SaluS in wallet feature were it sends .0001 SLS from each transaction to a unique address in order to slowly remove SLS from circulation and in process increase the value of SLS in circulation.

Interest Wallets: These are online wallets that collect interest on deposits.

Dividend Tokens: There are projects out there that pay out dividends in crypto. These assets can come in various forms traded on various exchanges. They might be assets, Tokens or Altcoins.

Traders Advantage: TA members gain slight advantage by having insight and real time info on SaluS engine. They get to see real time trades, open orders and trade history via exchange API. This method also provides transparency and verification. TA members also gain access to SaluS AltSheets, which provides near real time NAV of SaluS portfolio. There are two ways to become a TA members, either be within top 10 on the rich list or paid subscription. All subscription fees also go to SaluS reserve. 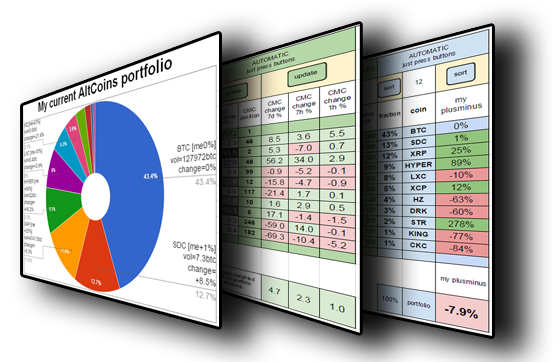 Would you consider any other forms of revenue streams in the near future?

I am always on a lookout for additional sources of revenue with minimal risk to no risk for SaluS portfolio.

What I like about Salus coin is that it helps secure the network of other PoS coins. When you are scouting for coins to be added to the portfolio, what do you look for in a coin?

That is true, coins have a lot to gain by being part of SaluS portfolio. As you mentioned, securing the network is one of the. It also supports the ecosystem of those coins by contributing to the market activity. I also promote and open discussion around those coins. We have this thing called “Coin of the Day”, last one was on AudioCoin (ADC), it’s where we pick a coin from the portfolio, post all the highlights for said coin in the thread and open a community discussion around it. In other words, we bring a lot of visibility and credibility to coins listed within the portfolio. Some of the key factors we look at when deciding on a coin is if its a scam or not, the tech behind it, the team involved with the project and if SaluS could benefit from said coin. By default, I support and try to add most coins that are part of CoinBar.cc or Slack Shared Network (SSN).

What are your plans for the future?

Near future would be to polish and iron out all aspects of SaluS engine. Eventually, I would like to automate and decentralize most of the manual tasks involved with this project. I have been in discussion with Presstab, developer of HyperStake and RateCoin in regards to creating a “voting by stacking” based wallet that would allow for investors to make investment decisions in a democratic fashion and to even execute client side actions, such as trades, by simply voting via staking. However, the end goal would be to make this process 100% automated and decentralized. Once this is in place and SaluS takes a life of its own, I will concentrate on my next project, at the moment I call it the “Holy Grail” which in a nutshell is a All In One Financial instrument. I do not give out too many details on this project, but if/when it gets made, SaluS will greatly benefit from it.

Thank you Core Media for the interview.