Finally, the awaited Waves client 1.0 has arrived. The client was revealed in Amsterdam at a release party that invited Waves investors, journalists and connected projects such as Deloitte, Primalbase, Oceanlab and Wavesnode. The event also starred Sasha Ivanov, the CEO of Waves, who gave a rundown of where Waves is at now and where it is moving.

The Amsterdam release party was a success. Investors were able to test out the client individually, as well as listen to various talks and learn about upcoming projects on the Waves platform. The new Waves client interface itself has been completely reworked in order to give the user an online banking experience. The client is aimed to be accessible to new users as well as more advanced users. The main feature that must be stressed is that the platform is well rounded, in that it will satisfy all the needs of upcoming businesses. At the end of the presentation, Sasha made it clear that Waves is going to play a huge part in the cryptocurrency world within the upcoming years.

On top of the client release was a new website and Waves logo. The team opted for a straightforward logo with the Waves name in lowercase and a simple rotated blue square. The logo speaks a thousand words, for it is easy on the eye, professional and trendy. The new website itself maintains this approach, a simple, not overly complicated that does not overload the user with information at first visit. With this design, it is clear Waves is gearing up for mass adoption.

Waves’ roadmap for 2018 was revealed with some very interesting additions. Smart contracts (including fully Turing complete by the end of the year) are to be added, as well as, decentralized voting, messaging, atomic swaps, off chain protocols and hardware wallets. 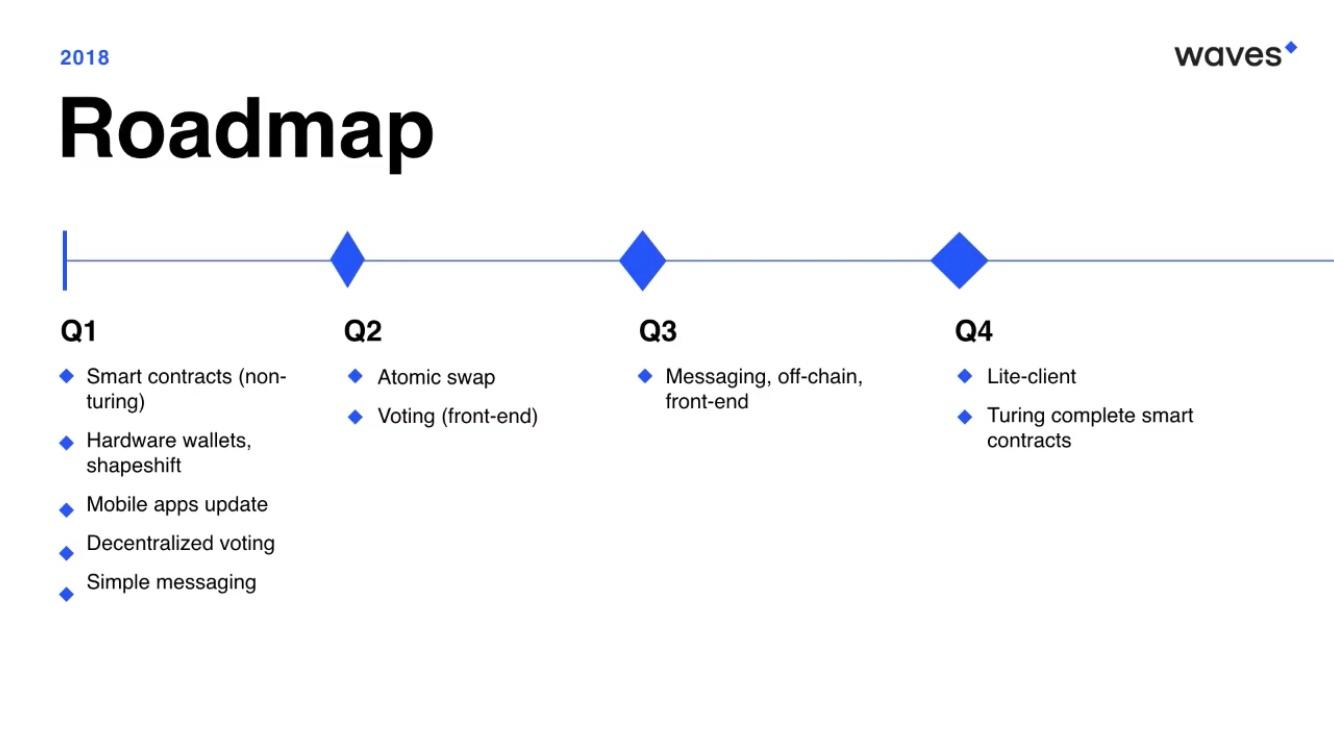 It was also announced that despite bureaucratic delays, Tokenomica has finally been approved via the Singapore government. The goal of Tokenomica is to provide a 100% fully compliant framework for ICOs; Tokenomica has been named the “JP Morgan for the crypto world”. Sasha also talked about upcoming ICO incubators that will help businesses transfer smoothly to the blockchain as well as helping to get them off the ground. As stated in a previous article, Waves also plans to airdrop a liquidity token to provide liquidity to upcoming projects.

Other speakers like Artem Tolkachev also provided some interesting insights into how Deloitte is currently working with governments in order to create some kind rules on compliance. Deloitte currently has a project named the “Better Tokens Project” aimed at preventing scams in the ICOs sphere. The idea behind such initiative is to get ahead of the pack and prove the ICOs are a viable option and nothing to be afraid of. With government suspicious of the blockchain and how it will affect their countries, it is important to have ideas on compliance before it even brought to government speakings. A favourable stance on cryptocurrencies within governments will not only be good for Waves but for the whole world too.

The Waves token is going finish the year strongly with the current market cap at over 1.5 billion, the price now well over $10, and a massive rise in volume. There is no doubt that this can be attributed to most recent releases such as Waves-NG, the new Waves Client 1.0 and the Liquid token. But we can also assume that as is shown in this presentation, Waves investors are now looking long term as this is just the beginning. If you would like to watch the full presentation, view below.